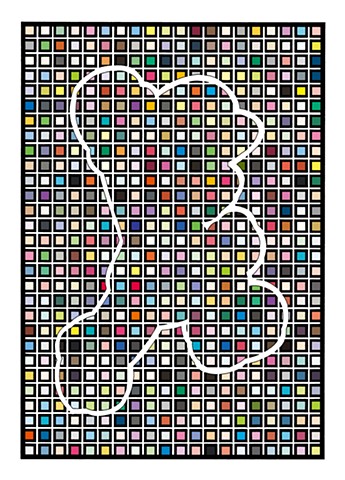 Hi Def Lo Def is a series of NFT's where a grid is drawn as either relatively small or large squares denoting drawings as either Hi Def (high definition) or Lo Def (low definition). Rather than the combined effect of square pixels to create an image like what we see on a screen or printed matter, images are created by cutting into the grid. It feels alot like sculpting. The first group of these images are taken from iconic video games. I was inspired to use video game iconography when learning some of the original objects sold on digital marketplaces were video games, video game related paraphernalia, and trading cards. The proportion of the drawings also mimic the proportions of trading cards. The colors used in the grids are created using a random number generator. I've used this approach in a few other works and randomly chosen colors have become a metaphor for equality as in rights and or distribution. In this case, it can be stated that the influence of the iconography that I'm using can be felt by any random person reflecting its cultural importance. Each drawing has a Hi Def version and a Lo Def version. Each version has 10 different iterations with 10 different sets of randomly chosen colors. E.g. Super Mario Jump Hi Def will have 10 different versions with the title denoting which version it is; Super Mario Jump Hi Def 1 of 10.