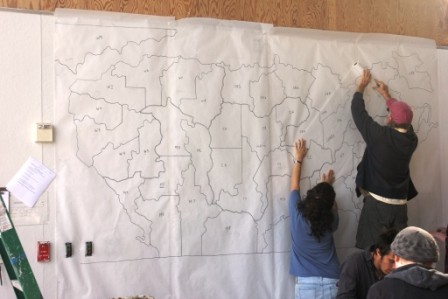 My residency at the Oxbow School started off with a map that I drew. This map was loosely based on the shape of the Optimal Road Trip by Randal Olson. "States" were formed and partitioned. Regions were created. This version of the United States has an eastern region, the west, central, and ofcourse, there are representation for Canada and Mexico, albeit very loose. Students were randomly given a state and their first step was to make a tracing of the shape of their state.